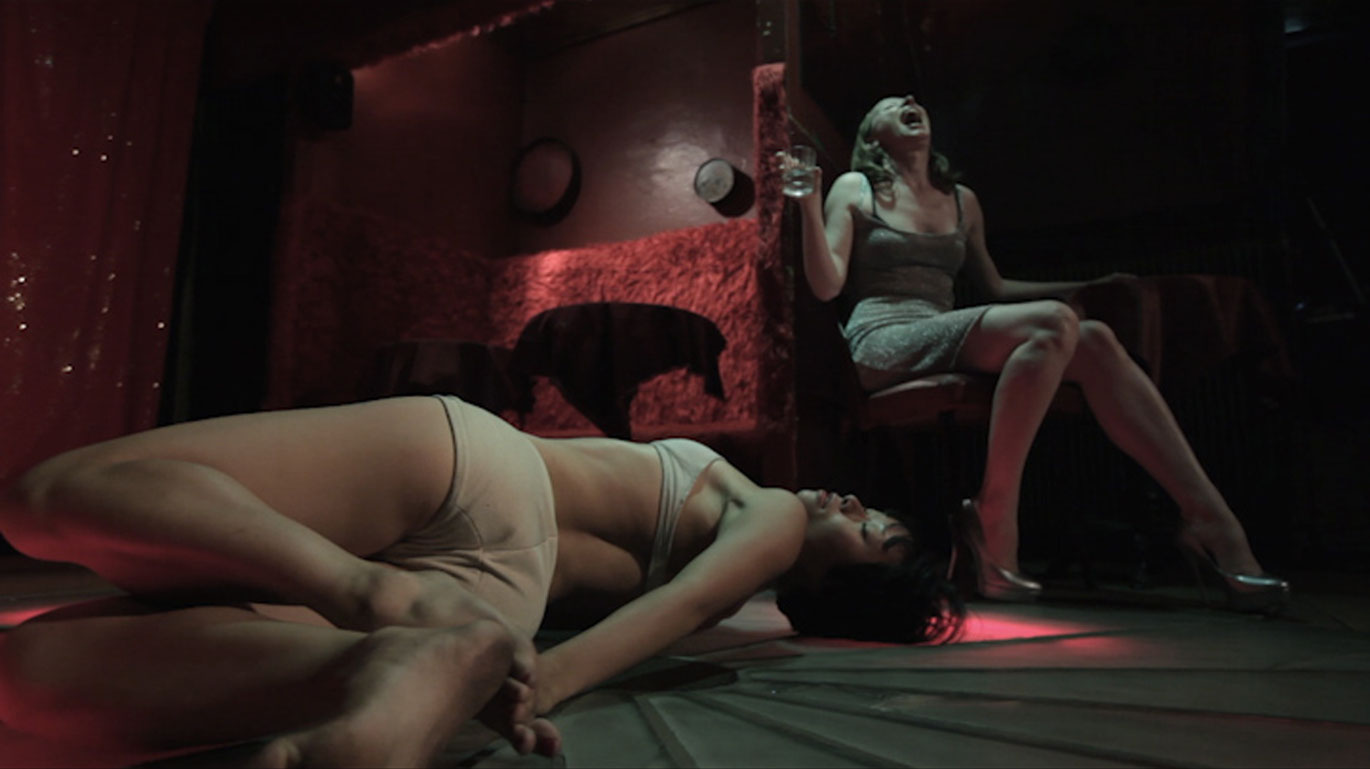 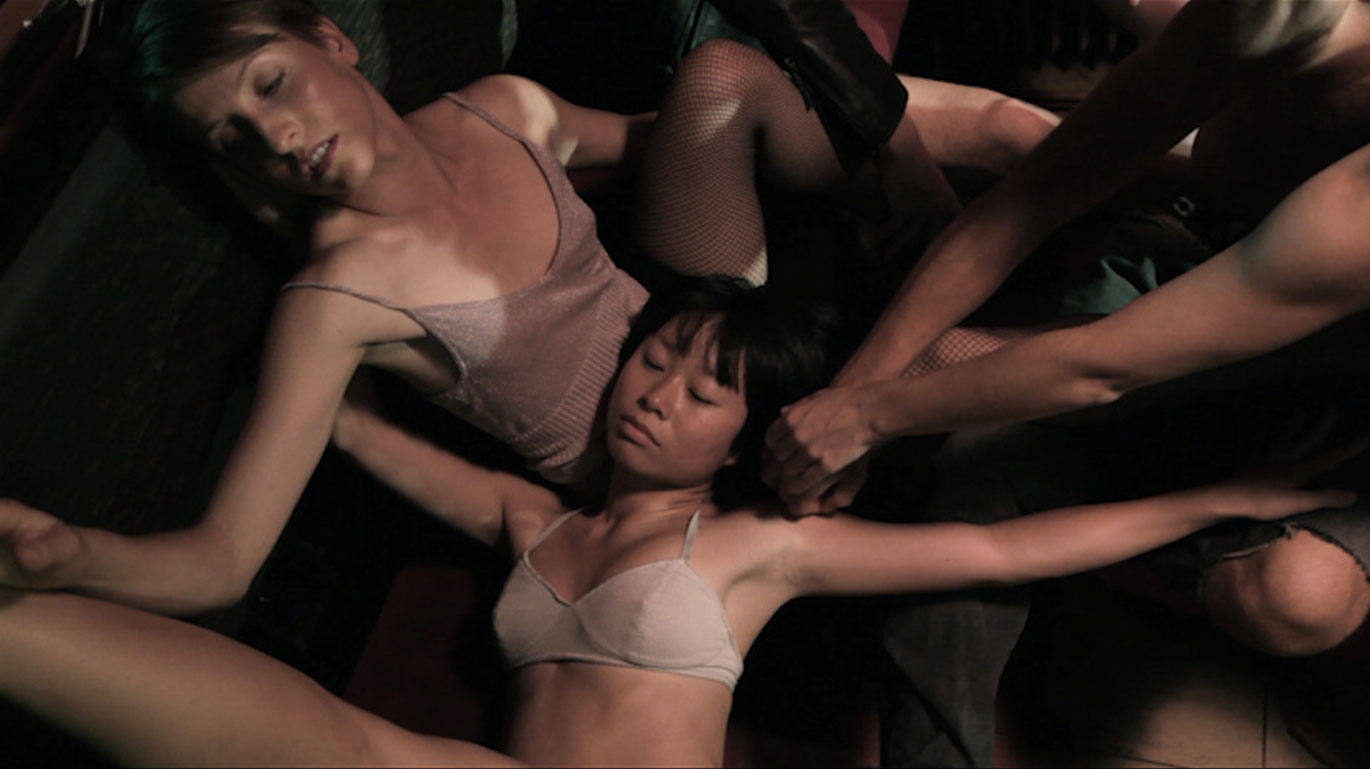 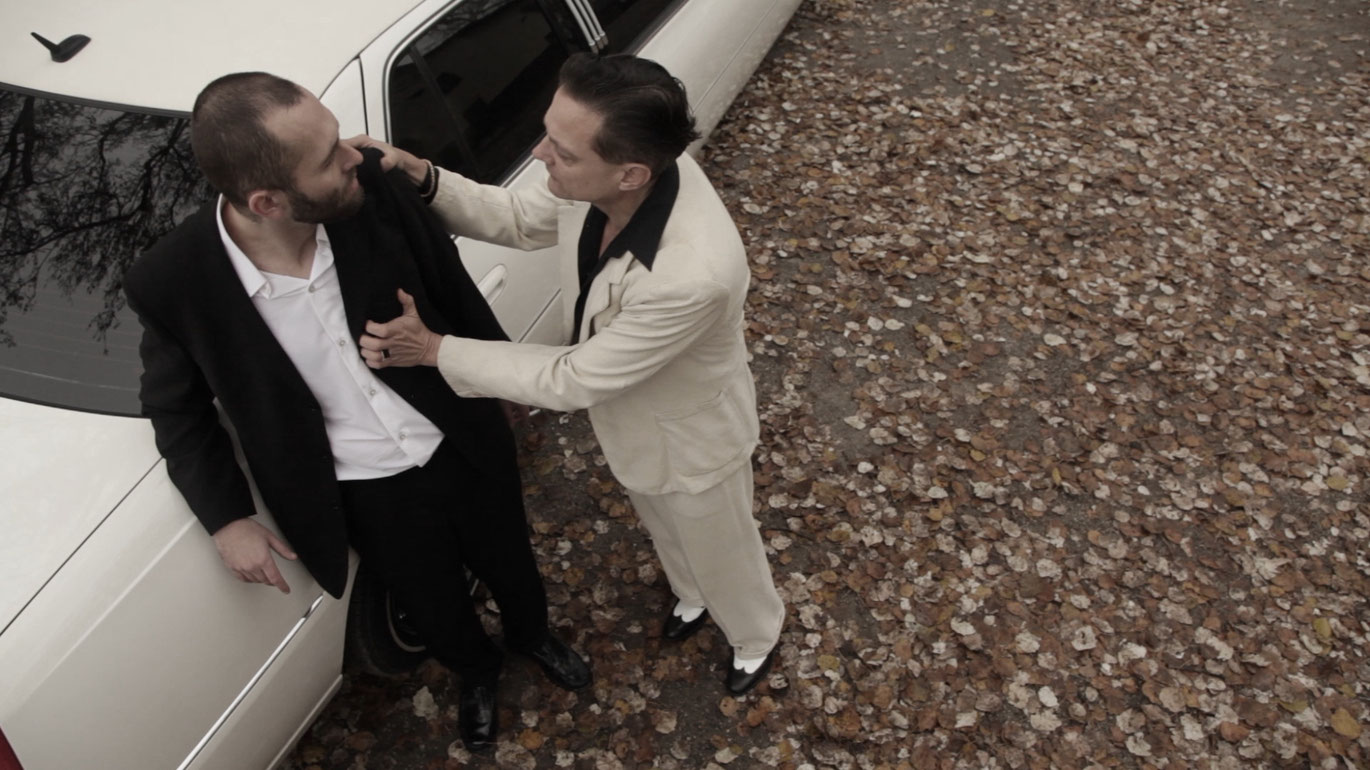 Immediately after the reported expulsion from the test garden, which the firm E.D.E.N. (Emergent Design of Evolving Nature) had set up for this prototype, these pubescent youths, who are, certainly, incredibly good looking, but also abundantly idiotic and only lightly dressed, found themselves exposed to a rather rough environment.
Awaiting there were a variety of beasts aiming to devour them: when not in flesh, then at least in the form of exploitation of their physical and sexual properties.
Thus arises this logical or evolutionary chain along the gliding signifier “P”, in the English that a highly-motivated sex and dance worker from Poland is trying to learn: Penis, Pussy, Paradise, Punishment, Prostitution, Production.
Well put, sister!

And then we are back in a David Lynch-like place before the eternal red curtain that conceals the well-known void. Like on a bad trip, one arrives there through a narrow, deep-red corridor. In this innermost chamber of the heart of dashed desires, which do not want to die at this freeze-framed early morning hour, where it is always 4 a.m., and all glasses, barely emptied, fill again, under the even-tempered gaze of a reticent faun, there, he sits, the sentimental Russian Mafioso and listens to a song that sounds alarmingly like nursing. Child-like, noxious sentimental tears flow. Doesn´t anyone ever grow up here? No, definitely not. After all, time stands still here and age devours youth, and youth constantly clamors greedily for—speck (the bacon)!


In an occupied establishment – a kind of self-defined sub-cosmos of reality – there is a sensual search for lust and fulfillment taking place. Women and men dance, desire, interact; their perfectly choreographed body game becomes a symbiotic extension of an excessively hedonistic sub- conscious. Amidst it all: a mafia boss seeks to take control of the establishment and finds the meaning of life in the process. Perfect Garden is a fabulously hypnotic film, utopian and realistic all at once.


A lyrical, joyful marriage between min.d and body, dramaturgy and choreography, the real and the fantastic. Men and women dance and desire uncontrollably at Perfect Garden, which rather than a bar is an Utopian institution where hedonism is more of a reality than an ideology. Perfect Garden is a hypnotic art film in which dancer and choreographer Chris Haring joins forces with filmmaker and performance artist Mara Mattuschka. Their hedonistic and utopian world filled with beautiful idiots is portrayed with inventive stylization: original camera angles, jerky or slomo images and distorted voices.