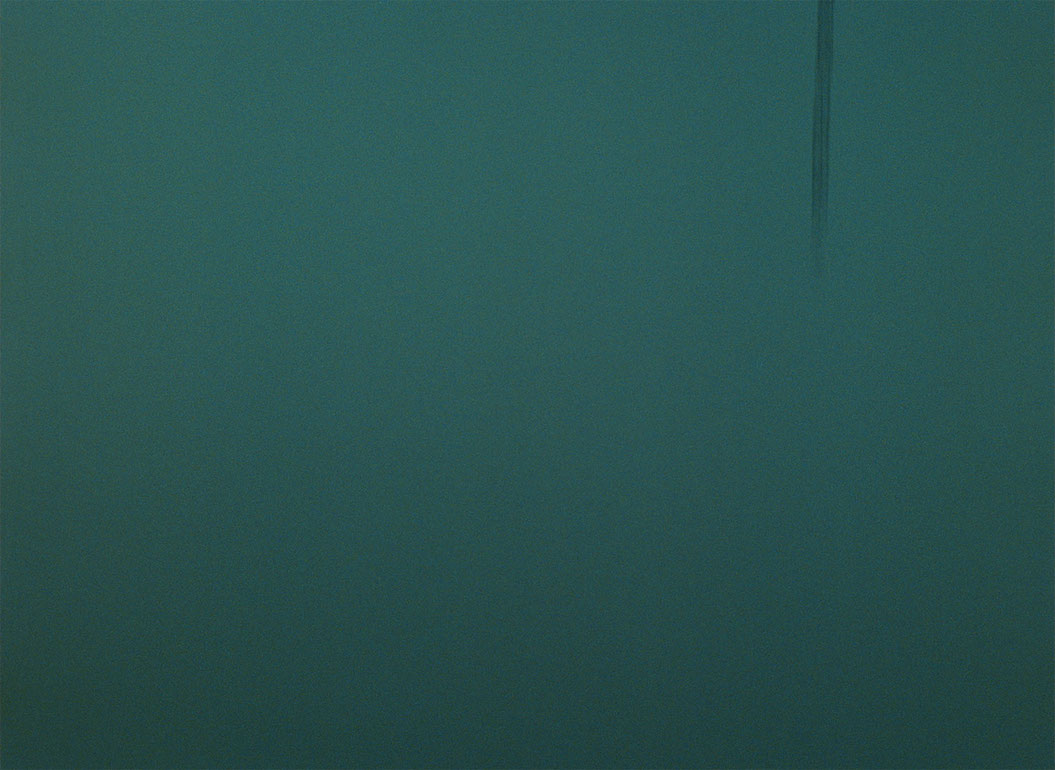 When it comes to cinema, a mirror is rarely just a mirror. As one of the medium´s most ubiquitous and expressive symbolic objects, mirrors have long represented something greater than themselves — usually, when looked upon, some otherwise internalized or unsavory facet of a person´s psyche. With TEAL, Björn Kämmerer strips the mirror of its metaphoric trappings and, in the process, restores a bit of its practical magic.

As has become typical of the Vienna based filmmaker´s work, he does so in deceptively complex, even contradictory fashion. Shooting silently at 25 frames per second, Kämmerer trains his lens on a series of free falling mirrors whose burnished, teal-colored backsides face the camera as they drop vertically through the frame. Against an all-black backdrop, the mirrors fall at rhythmically timed intervals, crashing to the surface in fits of syncopated destruction. As each pane shatters, reflective shards erupt outward, catching brief hints of the surrounding studio lights before being swiftly folded into the film´s clipped montage. As in Kämmerer´s earlier Navigator, the modulating sense of depth and verticality produced by these contrasting elements creates optical patterns and illusions within the 35mm frame that slowly dissolve spatial coordinates by allowing the profilmic event to shape and reshape the viewer´s perception from moment to moment. A tautological consideration of space, disposability, and cinematic iconography (and as such a literal object lesson in repetition), TEAL re-calibrates the mind´s eye through the subtle application and disruption of familiar forms. (Jordan Cronk)

Frames are falling vertically across the picture window, shattering on its lower border. Over and again, in a steady rhythm with always varying breaking lines at impact and ever-changing forms of destruction and disappearing. Minute particles of glassy material – shooting stars! – are briefly whirled up into an infinite blackness, before everything drops out into the Orcus of the Off, leaving nothing but an empty frame, ready for the next fall, the next crash.

It is light and it is material, which is incessantly falling and breaking inexorably. It is the blind backsides of mirrors, of a murky blue-green (the colour of the title stemming from the plumage of the homonymous dabbling duck), of which individual fragments, shattering and scattering in all directions, briefly turn their light-reflecting faces towards the camera.

It is cinema. Thirty-five millimeter. Archaic. Four to three. (Explain that to your grandkids!) Silent but roaring. Live-action.  Handmade. Brutally subtle.

It is Buñuel’s razor blade cutting through the cow’s eye, Deren’s shattering of her own mirror image, Kubelka’s „Arnulf Rainer“, its strips (of celluloid) nailed to the wall as a score, or Kren’s silhouettes in „3/60 Trees in Autumn“ as well as his perforated, made-out-of-holes Weltbild in „31/75 Asylum“ etc. And – thinking backwards – it is the Lumières’ torn down wall from the penultimate century, magically re-erecting itself, if we imagine Kämmerer, the Viennese formalfilmer, as he some day, when we finally will have run out of electricity, might be cranking his mechanical projector-camera in the light of a miserable, flickering lamp. Forth and back. Down and up. Picture and break
(Thomas Korschil, Bolivia, 2019; English translation 2021)