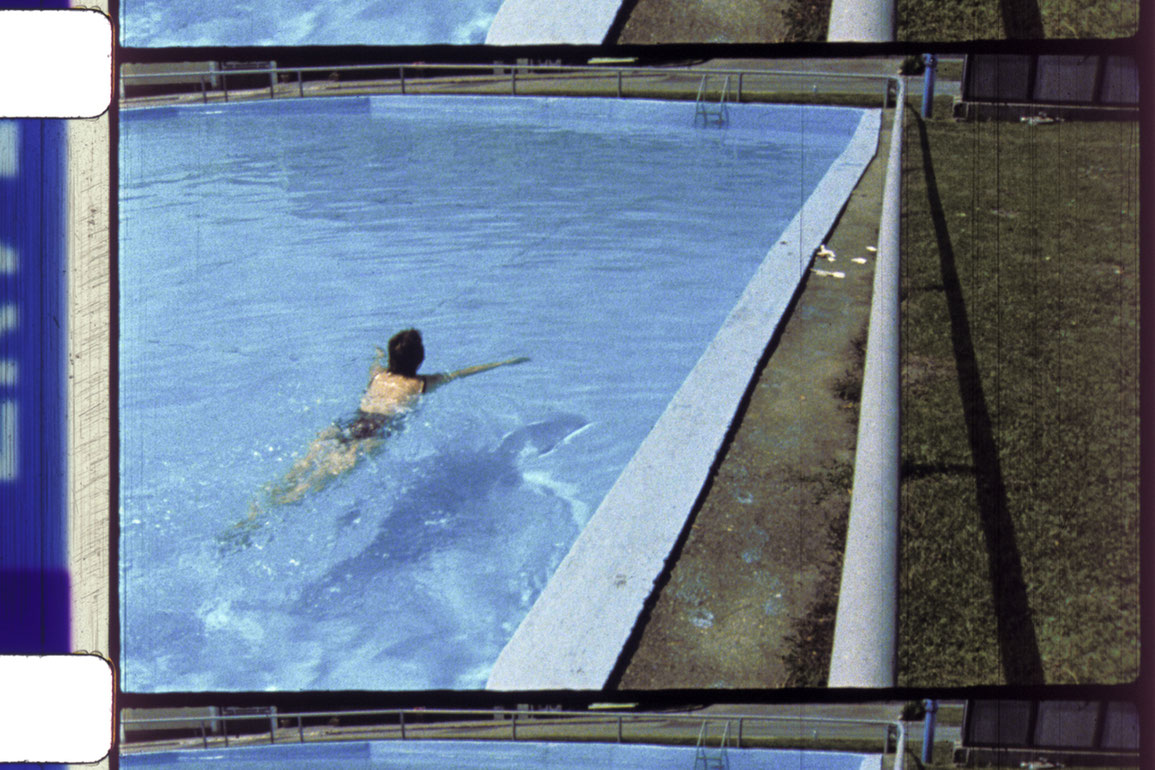 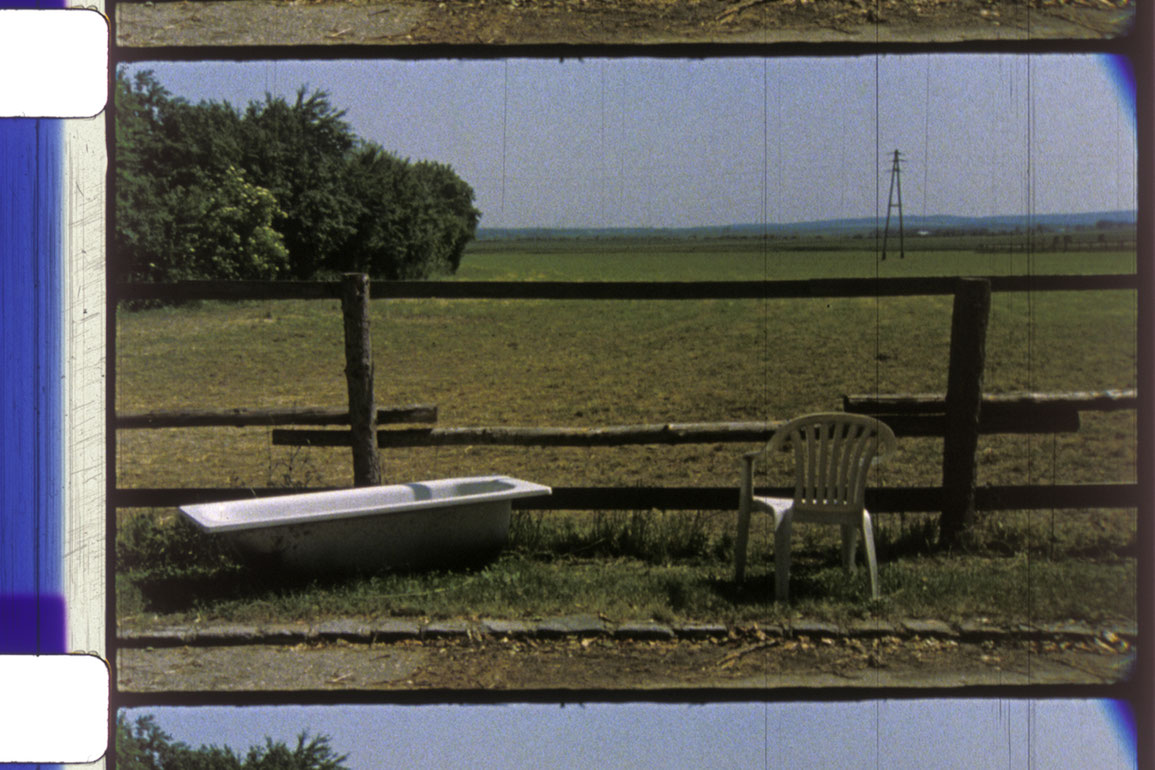 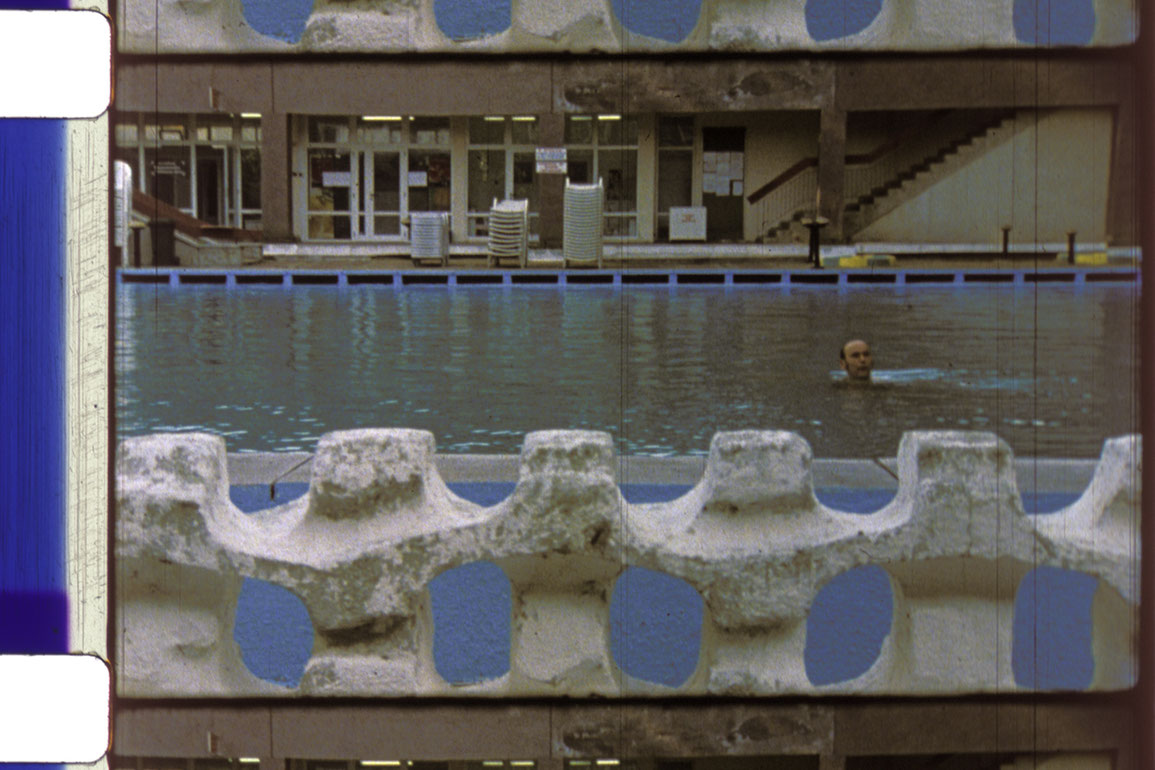 A detail of an image is often sufficient to evoke an archetypical vision: St. Florian´s bucket, for example, which the saint emptied over a burning house. The camera pans from this detail of an Alpine-style wall painting to a firehouse – with subtle dripping in the background – and there it is, the archaic concept of water, which baptizes and feeds and helps things grow and protects.
Josef Dabernig and Isabella Hollauf´s Aquarena – a combination of the words aqua and arena – approaches the link between water and (the public) space with a certain amount of fondness. The camera sweeps over concrete containers and rusty pipes, drinking fountains and water tanks. It shows water as an element which is lovingly cared for, has been made useful and, in the final analysis, which bonds. But the concrete already has some cracks. Algae is spreading. Streets and squares are abandoned except for two swimmers, the directors, who do laps in the blue pool. At the same time the film´s structure, like the reflection on the water´s surface, is arranged in the form of a mirror image: In the first part the woman glides from right to left, and after a black frame the man swims from left to right. One expects that they will meet at an imaginary axis in the film´s center.
A cello, dripping water and the city of Leipzig´s 1974 Water Act are united in a composition on the soundtrack: "Wasting water contradicts the Socialist principle of rigorous economy." The fountain outside the gate is a myth of romanticism. There´s pruning and administration in every community. And in spite of that fact all pools are still painted blue, like in a child´s drawing. The concept of water is related to that of the sky, which one can truly discover, as Dabernig does, while floating on your back.


A woman and a man bathe in two separate locations. Their swimming creates the backdrop for an excursion into the cultural, biological and technical dimensions of the world of water. A village swimming pool and a time-worn health spa resort merge together with the tones of a violoncello and historical texts an keeping water clean.

(Catalog of the Museum of Contemporary Art in Krakow)


Aquarena demonstrates the tensions between nature and human endeavor via an atypical essay on the Socialist policing of water dissemination, its potential for contamination and waste, and the erosion of public works. An extreme close-up of a typical Alpine illustration, Saint Florian (patron Saint of fire-fighters) bearing a bucket of water to douse a house fire, is peculiarly cropped and headless, painted as a large mural on a concrete façade. A montage of oblique cuts follows the enigmatic pull of water. In a starkly barren, hexagonal pool existing in the middle of a traffic roundabout, a woman climbs in and begins to swim in the crystalline water.