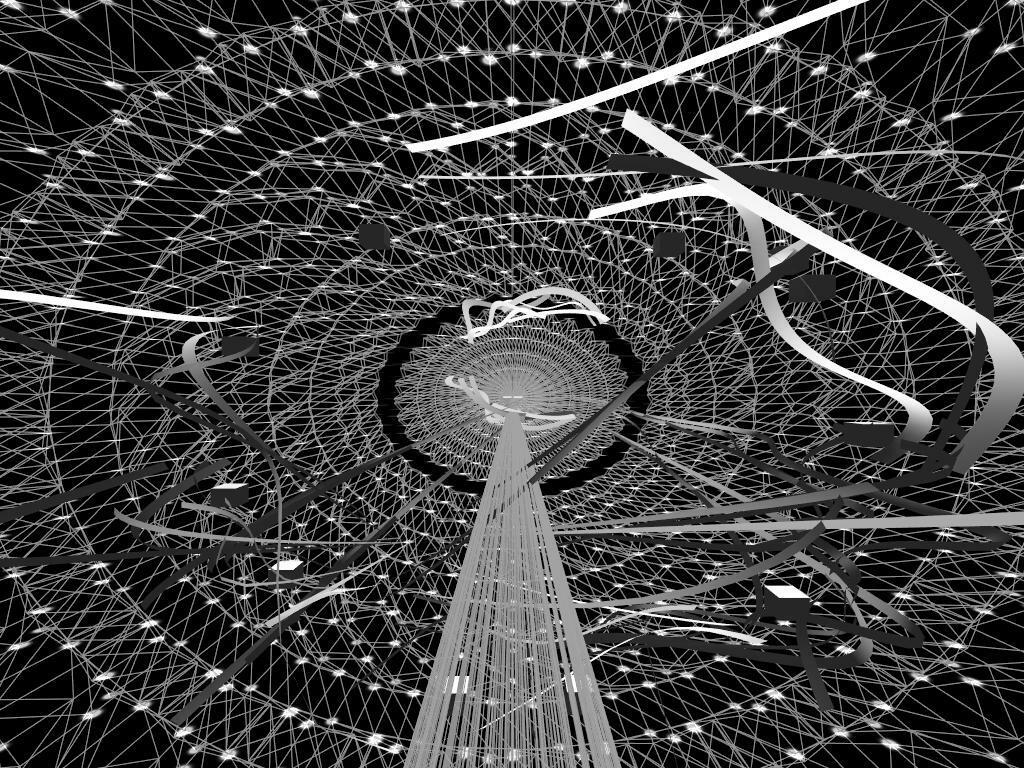 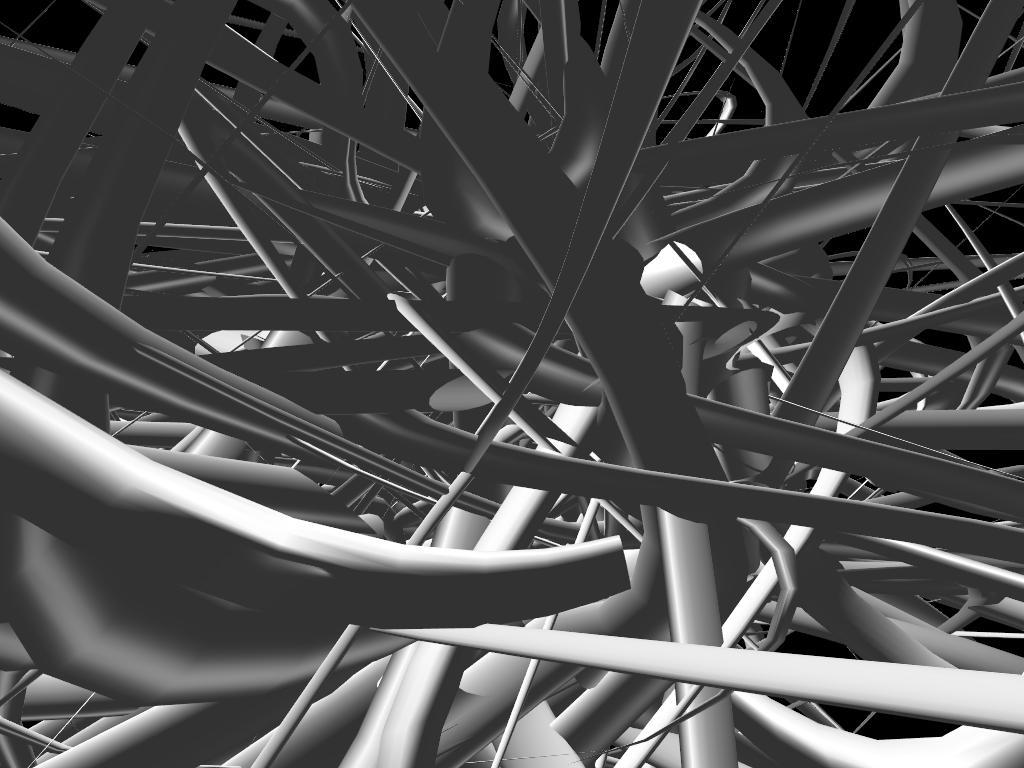 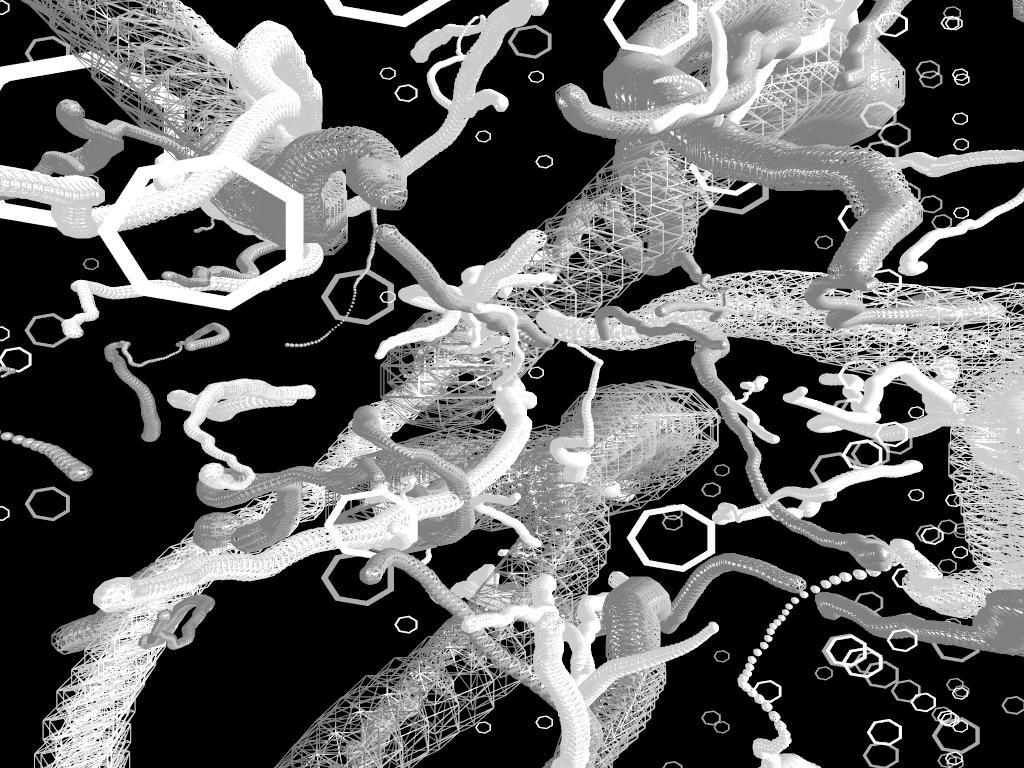 The flowing cartographies, illuminated by points of light, change auto-generatively, like the hovering urban spaces. The structure of these artificial cities is determined by the data density and its random distribution, which causes a permanent process of transformation of urban structures. Mutative particle and magnetic fields arise, whose gravitation varies. The matrix of orientation for the invisible inhabitants is determined by the changes in the oscillating data density and transformations of the vectors. The actual site of the subject does not exist, especially since the constantly changing spaces defy definite situating.

The essence of flexible cities is the ambiguity of their symbols, which encompass not only all spatial dimensions in their incessant new links, but also the temporal parameter. The operations for the configuration of these abstract spaces interfere in such a direct way with technologies for visualizing urban structures, that the difference between them is not clear. The abstract and non-commensurable relations of the consecutive and overlapping cartographies and urban spaces defy associative comparisons and metaphors. flexible cities expand the city in a noosphere developing along an unforeseeable and procedural course.

Looking from Cerro San Cristóbal to Santiago de Chile, what opens up is not only a beautiful view of a metropolis, but also a powerful droning and humming. The city, embedded between two cordilleras, is an imposing resonance body of steel, cement and asphalt. In Walter Ruttmann’s “Berlin: Die Sinfonie der Großstadt” (1927) the metropolis was already shown as a pulsating, hectic, but thoroughly living organism.
Whereas this urban dynamic still stood for development and progress at the time, today the rushing noise of the big city is faded out behind headphones, car stereos and noise-proof windows. Since there is no acoustic urban planning, all that is left to the individual in public space is “acoustic cocooning”.

In the multimedia project Flexible Cities four-dimensional, virtual, abstract cityscapes are generated in the computer. Three dimensions are formed by the x, y, z-axes of the space, the fourth dimension is represented by sound, which generates the spaces and cityscapes.

A reversal takes place. It is not the city that generates noises and sounds, but rather the sounds generate and illustrate the city. Acoustic signals are analyzed in their frequency spectrums, dynamics and volumes, and the extracted data are read into matrices, from which three-dimensional objects are generated according to complex mathematical operations. These objects can subsequently be multiplied, deformed, scaled, rotated and dynamically changed in their positions. The acoustic signals are simultaneously represented as two-dimensional images, which serve as textures for the constantly changing three-dimensional objects. In addition, calculated three-dimensional objects can also be used as textures for further three-dimensional objects through the so-called read-back procedure, which enables the most diverse possibilities for projection. Although the images can still not leave the rectangular form and boundaries of the monitor or the screen, manifold projections, perspectives and depth effects dominate within them.

The Flexible Cities are oriented to new forms of representation, such as multiple perspective projections and layer x-ray. Multiple perspectives and many, transparent layers can thus be represented simultaneously. The artificial urban spaces are particle spaces, magnetic field spaces, spaces with different gravitations, continuously distorted and flowing spaces, which all suggest a new orientation, development and inhabiting of the space. The inhabitants of the Flexible Cities are no longer oriented to conspicuous forms, axes, edges and clearly demarcated areas, but rather to the density distributions of data, orientations, and changes in scale and transformation vectors. The Flexible Cities are subject to constant changes. They principally change in real time and autogeneratively. In addition, chance is integrated into the mathematical framework. This occurs in the form of random distributions of data in the matrices through random generators and white noise. In conjunction with the computer as a determinist system, it would be more correct to speak of pseudo-random numbers. Drafts as intentional, purpose-oriented acts are replaced by aleatoric processes in the form of whole series of formal transformations, from which the programmer and the artist choose according to aesthetic criteria. They let the machine calculate and are attentive enough at the same time to recognize their own purposes when they encounter them in the flow of forms.

The determinist chaos of the mathematical random generators and noise functions is juxtaposed with the hermetic mathematical concept of the superformula (see appendix). This formula developed by the Belgian mathematician Johan Gielis is based on the idea that conspicuously many abstract, natural and man-made geometrical forms can be described by a specifically expanded formula of the circle. The formula represents a complex equation for circle and ellipsis to the same extent. With sound data as the parameters, according to the formula the machine begins to calculate and simulate a multitude of organic forms.
Various states of gravitation, tectonics and light conditions predominate in the Flexible Cities. Because of the new states of gravitation or the complete absence of gravitation, tectonics as an aesthetic expression of gravitation recedes into the background. Its task is now simply to make light visible in its manifold manifestations of light, shadow, shades, gradients and transparency. Different light sources, which alternate in form and position, illuminate, generate and manipulate spaces and sectors. Multiple artificial suns orbit, illuminating a darkness that constantly spits out shadows and swallows them again.

Binaural Sound Recordings, Acousmatics & Space
Music and noises generate Flexible Cities. The basis for this are binaural sound recordings of urban intersections of transport, movement and communication. Artificial spaces result, with time processes of their own, making a seamless transition from compressed micro-space all the way to reflectionless open spaces, from static noise to beats. This results in a sonic interplay of identifiable references to realistic sounds and abstract morphologies of the apparatus world.
In order to make it possible for an audience to experience these acoustic constructions live, two different sound systems are used. Conventional loudspeakers with broadly emitting and diffuse reflection behavior locate us in the Flexible Cities, while so-called hyper-sonic speakers enable a view of the emergence of a Flexible City from outside.