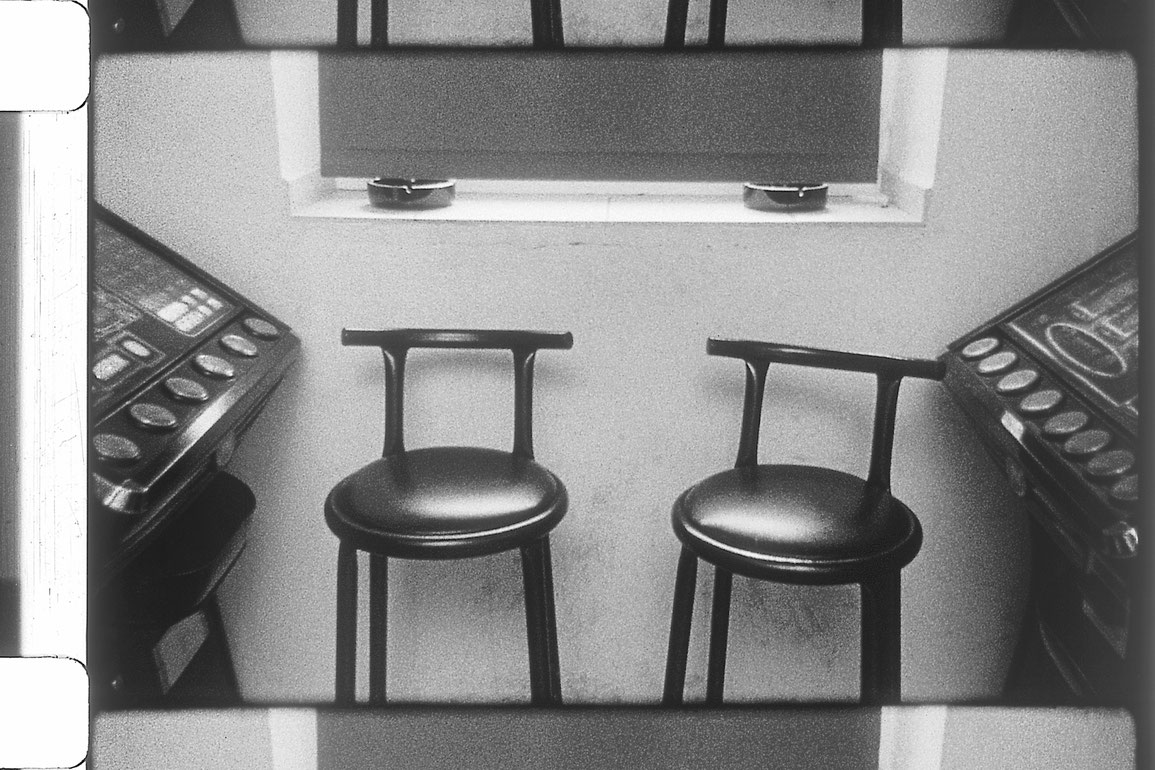 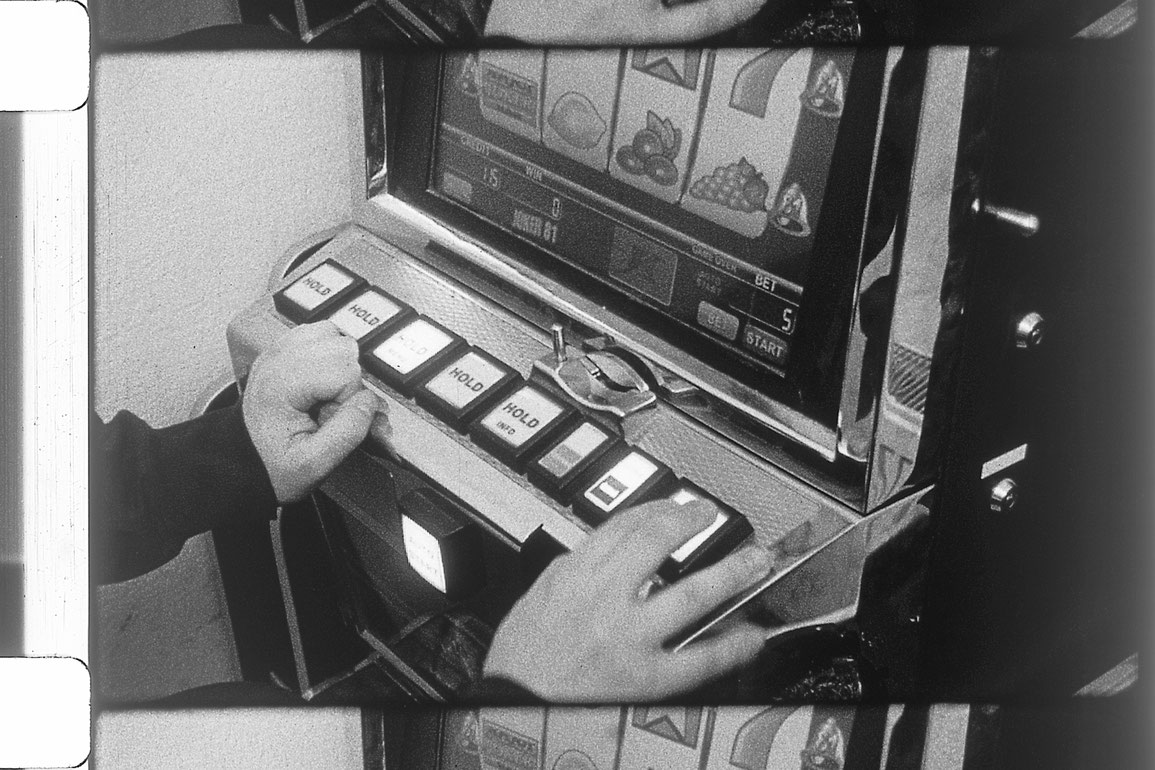 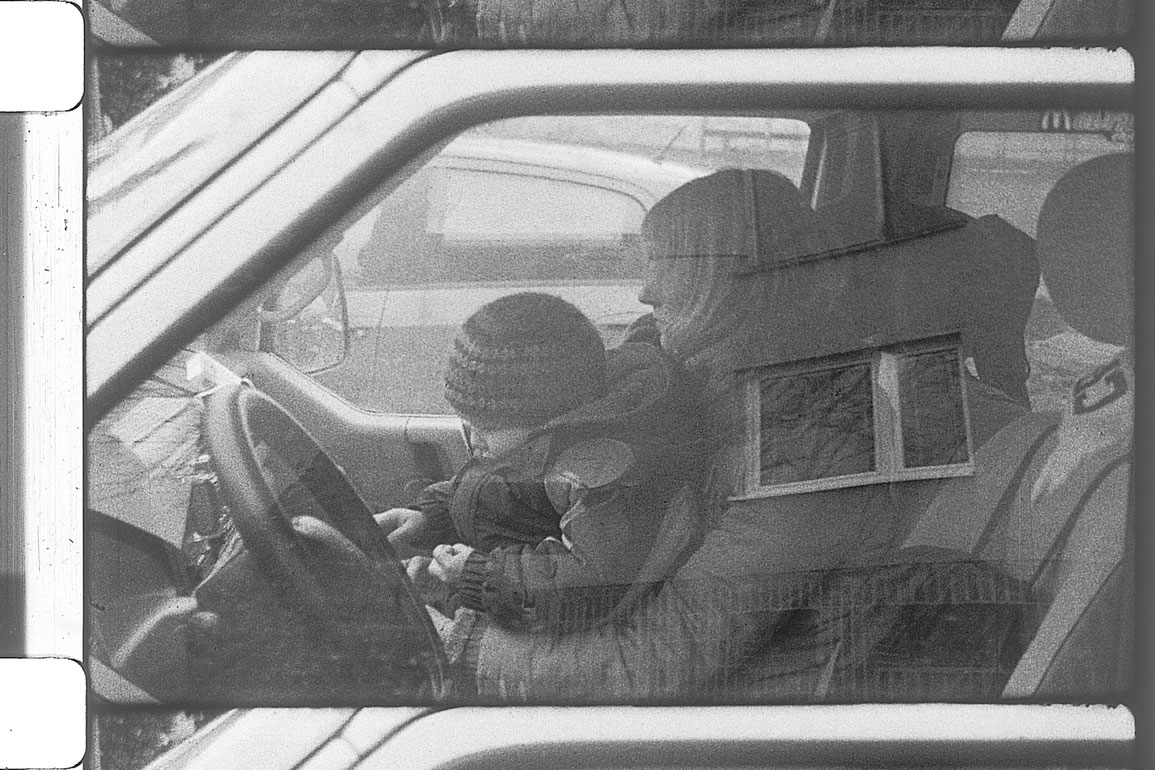 A man, woman and child sit in a car. He parks it, walks a short distance, enters a gaming hall and heads straight for a machine. The woman and child remain in the car, are bored while he tries his luck. The camera zeroes in on details at the modest casino: a lamp, a loudspeaker, worn walls and chairs, slot machines blinking away. A few men sit by themselves in the main room. We catch sight of a number on the digital display; it has two decimal digits, is as cryptic as the Dow Jones and comprehensible only to those in the know. The man has since switched to a different machine, a closeup of his hand shows it monotonously pressing the same start button. He has moved up from coins to banknotes. Using the reduction typical of his work, Josef Dabernig successfully creates a drama that suggests the three individuals´ loneliness and emptiness. Each of them stoically plays his or her part, presumably hoping for an improvement of their financial situation, though the child has no choice. While the interior and exterior of the spaces serve as additional protagonists, they fail to provide a dramatic climax in their everyday provincial character either.

The austere dreariness of the gaming hall, which is located somewhere in the Czech Republic (though it could be in any number of European countries), and the promise of luck it offers people with low incomes are dialectically intertwined with the artificial dialogue of a different social class. In Bruno Pellandini´s radio play two women meet, and two men invite them to a drink. The subject is striking it rich with castles as investments, and the women cheerfully harmonize. They see themselves as taking part in upper-class banter. At the conclusion, as everyone´s saying farewell, one of the women mentions the other´s failed marriage, but doesn´t go beyond anecdotes. The satire of the empty talk of the rich, or recently wealthy, dovetails with the actors´ lack of anything to express visually.


Herna is a filmic miniature about the passion of gambling, edited together with a soundtrack consisting of a radio play by Bruno Pellandini which provides a rich counterpoint. A dramatic, acoustic kaleidoscope of four voices unfolds as the gambler loses himself in space and time and his wife and child are stuck in a car. The theme under discussion is about life and death, possession and loss.


In Herna, image and sound are in disorder. The young protagonist is taking his chances at slot machines in a game bar (herna in Czech) in a gloomy Moravian town, in the obvious hope of becoming rich and, certainly, quitting its drab location, while the aged caricatured personages of a radio play (written by Bruno Pellandini) in a Viennese cafe, over some serious Slivovitz. They are prating about real and imaginary fortunes, castles, and chic hotels, lost by some, won by others, always in an extraordinary set of circumstances. At some point characters start to recite in rhyme, carrying the tone to the point of operetta-like inebriated absurdity.