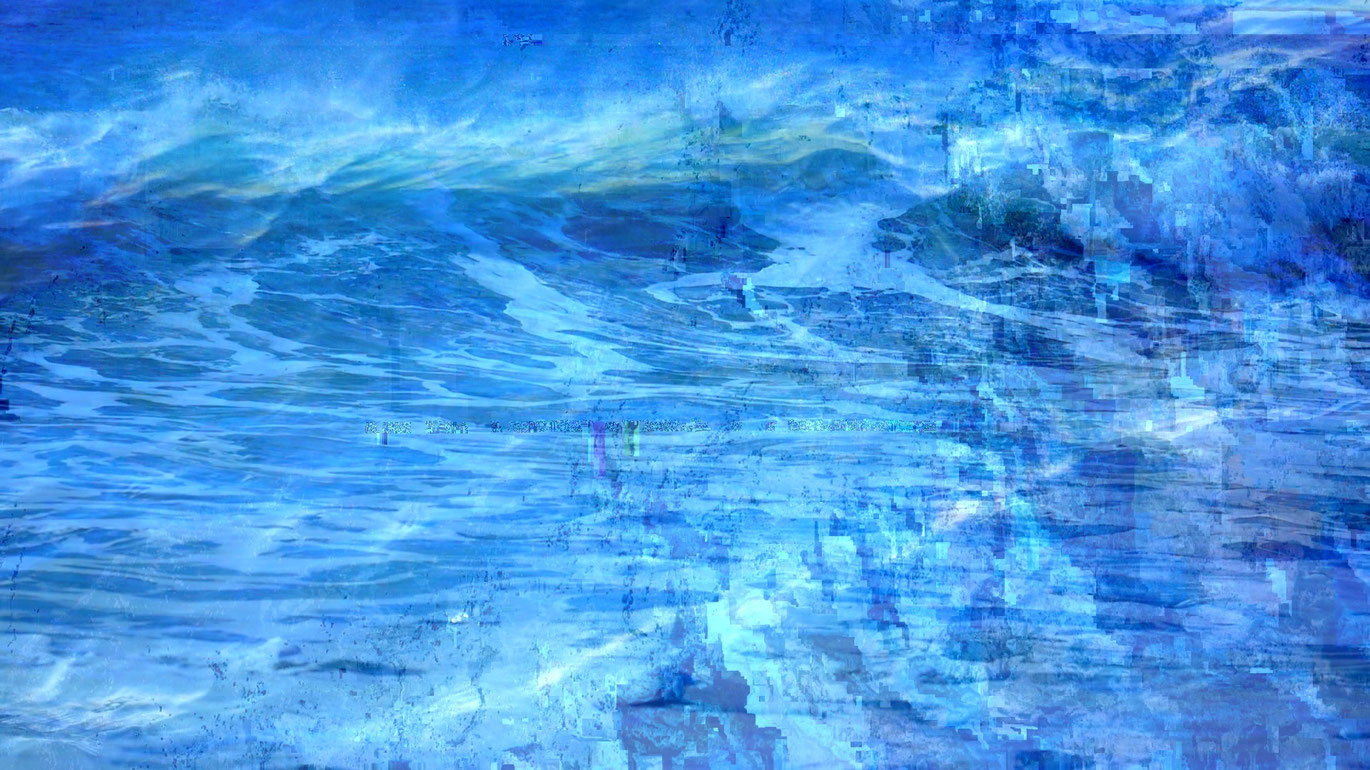 "Aquamarine" means not only the well-known light blue hue, but also, what the color is based on, the mineral beryl. Translated literally: the color of the sea. The film AQUAMARINE takes a constellation of (blue-green) color, maritime, liquid, and of course, mineral, as a starting point for setting the cited components in a jolting, undulating balance based on the track of the same name by the group MOPCUT. The visual starting material comprises views of the ocean around the island of Gomera, filmed from above, in close-up, or from a ship. Pastel blue shimmering white crests, but also nocturnal shots of the horizon are set into convulsions and (time-)bends to the music—for this, Billy Roisz and Dieter Kovačič employed a specially written program for defamiliarization of the frame rate. The "liquefaction of the liquid" is taken to such extremes that—as soon as the guttural singing begins—a spectral fluttering and untenable fluctuation overcome the image space. For a while, the ruffle of waves, permeated by all manner of chimera, heaves in an ominous black and white. Set to the increasingly more tightly timed sound texture are flash like illuminations and shadings that continually steer the gaze to the abysmal light blue. Slowly, a bottom is peeled from the (water) layers, which at the same time, signifies spectral infiltration and medial growth in structure. In continuously new, additional color shades, a type of mineral framework gradually becomes visible behind the shimmering surface. The digital "crystallizes" here layer by layer and at the same time, keeps on flowing. A symbol referring to the subtle stabilization of our seeing, which has meanwhile become accustomed to fluid images. (Christian Höller)


AQUAMARINE is a video by Billy Roisz and Dieter Kovačič for the track of the same name by trio MOPCUT (Lukas Koenig, Audrey Chen, Julien Desprez).

The work of Billy Roisz, combining the media of sound and vision, aims for fusion, but also a fracture. The image and the music (often a “noise music”) always go in sync, frame by frame and pulse by pulse; and yet they never easily or comfortably fuse together – and one never simply generates or illustrates the other. In AQUAMARINE (made with Dieter Kovačič), the sea is rendered as no longer a beautiful, placid image but a fearsome, stuttering mass of energies, prodded or poked by Mopcut’s harsh music. STYX, with its rolling abstract lines and shapes of light, evokes fleeting details from the techno-graphic world of Godard’s ALPHAVILLE, but in colour, until the sea once again insists as an elusive, intermittently glimpsed background. SURGE (also made with Kovaačič) places us somewhere between figuration and abstraction: its displayed forms defy full visual comprehension, as they stretch and snap in strict accordance with the complex beats and sheets of sound created by schtum. Only very lazy critics could label Roisz’s complex, enthralling pieces as “music video”; she is, in fact, taking us into a new realm where image and sound achieve an unstable, forever disintegrating synthesis. (Adrian Martin)